The stars were still out, and it was cold. A hard frost, an October gift from north winds and clear skies, dusted the land in a silvery white. I wanted to leave the cabin before dawn, and spend the day wandering wild country in any direction I chose, led by curiosity, not a map. For the moment, I got as far as the front yard. I laid on my back, took a deep breath, and exhaled a foggy mist towards the stars. On this late night in autumn I was seeing spring stars. Orion was holding court, chasing a bull across the sky, unaware that a lion would soon be on his heels. I tried to make up my own constellations. Much easier, I thought, if I went south of the equator where I did not know the stars, or brought along a child who didn’t have them etched in memory. I spun myself to a new perspective and was able to lose track of what was what, and start fresh, creating my own dot-to-dot mythology.

Colors were starting to assemble in the east. Deep dark blues, followed by reds and oranges, as though pyrotechnicians were hustling back of stage before the big show. I stood up, now chilled from the ground, and started off.

I passed through the garden, seeing that it had been cold enough to finish off the last tomatoes. Spiked and lacy ice crystals were catching the sky’s early light, a showy distraction from yesterday’s tender greens they now covered, lifeless. I picked an apple, put it in my pocket, and carried on, wandering my way up and over a sparsely forested ridge, the twisted silhouettes of old junipers like an unorganized parade of Halloween skeletons. I looked out at the valley below just as the sun broke over the eastern horizon. I stood directly in its rays and stretched. I wasn’t thinking about how warm I might be later, how I might be thinking I brought too many clothes; right now I was soaking up any warmth I could find. As the sun rose higher, I sat, looking into the delicate backlight of seed pods and dried flowers, and pulled out the apple. The world was quiet. This same spot in spring would be abuzz with the sounds of birds during the day, and crickets at night. This overnight freeze, well into the teens, pulled the veil of silence over everything. I heard an owl, just one plaintive note, and moments later two scrub jays squawked over something hidden to my eye. But not another sound until I heard the first sun-stirred wind caress its way down the valley. A gentle whooshing, parting chamisa bushes, then building speed until it reached the cottonwood next to me. It hit the frost-weakened leaves and bowled them off the tree. Perhaps a hundred yellow leaves went soaring into the air, then feathering to the ground. One landed on my boot. A cactus wren called from a branch behind me, announcing the day.

I wandered on, hopped up on the trunk of a fallen tree, held my arms out to tightrope along its girth, then hopped down and scrambled up toward a sandstone outcropping overlooking the valley. Following the cliff along its base I rubbed my hands across the rock, loosening a few grains from the sandpaper surface, exposing new sandstone that had been sealed from air for 165 million years. I tried to imagine the vast seas that covered the area, wondering how far below water I might be. 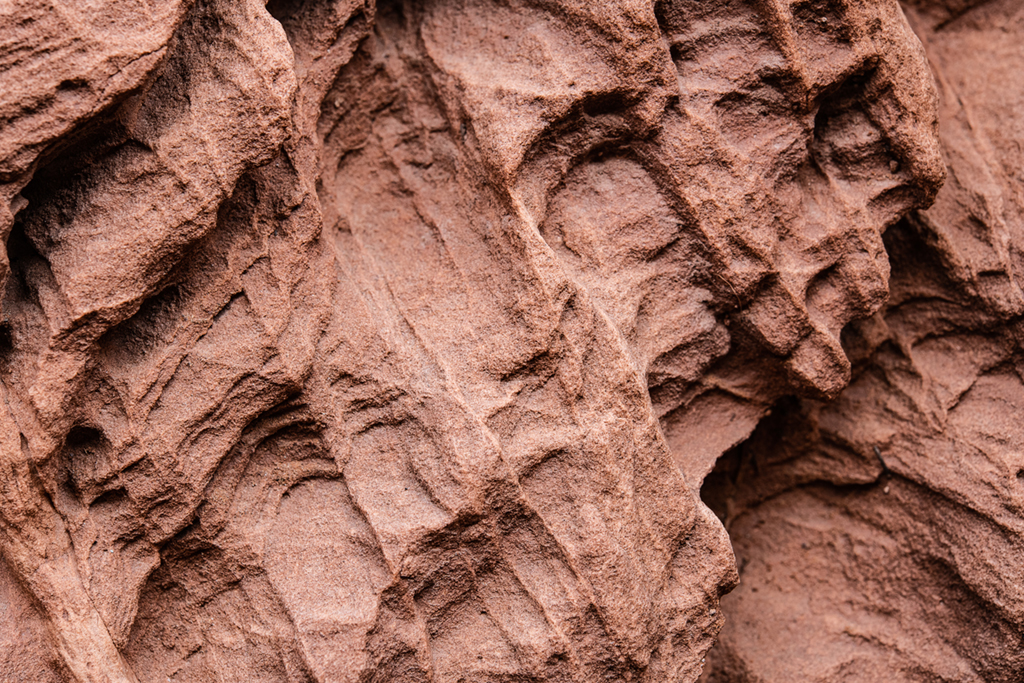 I climbed higher, and arrived at the top of the cliff. Looking out I could see the yellow beacons of a large grove of cottonwoods further down the valley, and took off to be in it. Soon, standing at the base of a tree on the edge of the grove, I entered a golden kingdom. Slate gray trunks rose out of a stained glass mosaic of fallen leaves. I gently walked over a patchwork of leaves, delicate in my step as if they might break. I found every shade of yellow—from cornsilk to goldenrod, mustard to lemon—occasionally embellished with splashes of orange, red, and green. Further on in the protected inner forest it seemed that the autumn layer of yellow was ever so slowly being raised above my head; first I could reach out and touch the vibrant leaves, soon they were far above me, all but blocking the blue sky. 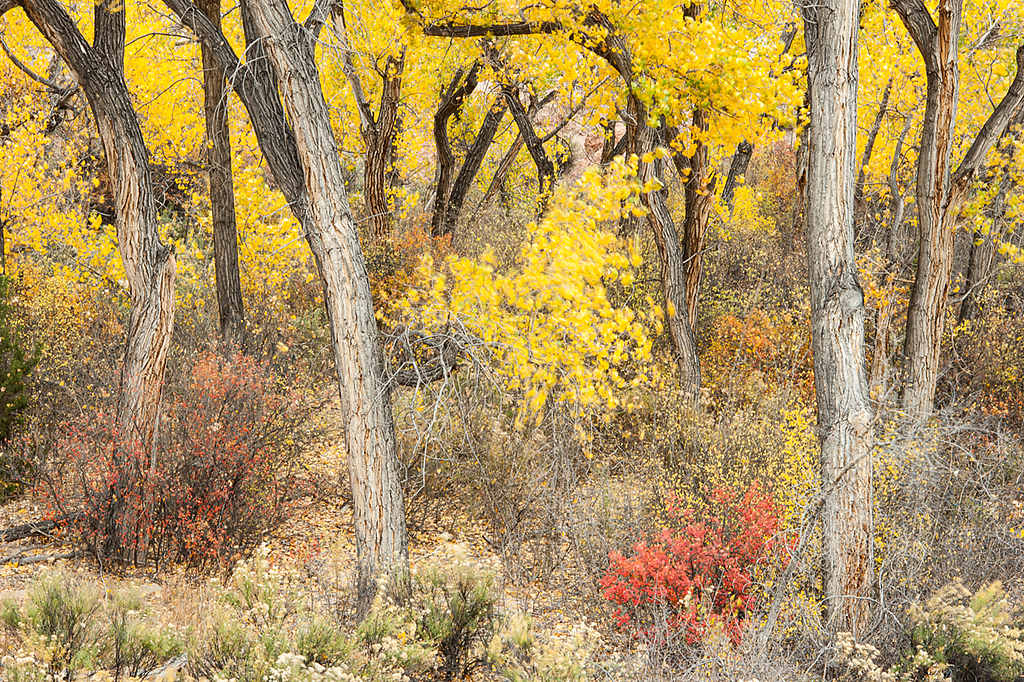 I sat again, as I would do often during the day. Perhaps to write, maybe to do absolutely nothing, and twice to lie in a beam of sunlight and sleep. Once while sitting ever so still, a little wren landed on my shoulder, quickly caught its mistake, and flew off. Later, exploring a rocky plain spread out below a massive red cliff, I played an old game, trying to find the source of today’s aromatic desert perfume. As best as my human nose would allow, I concluded that this fragrance was a blend—piñon, juniper, a silvery green plant with little white tuffs, and a mystery contributor, which added a citrus-like bouquet. But I couldn’t find it.

I wandered into land I had never seen before and also came across familiar places from new angles. As the sun finished its arc across the sky, I surprised my sense of direction by emerging into a side canyon that led down to the sandstone cliff above the cabin. I walked into the ravine and felt myself sink into a bath of cold air. I shivered, looked up at the clear sky, and saw the faint pinprick of a first, lone star. I poked under the straw mulch as I passed through the garden, and found two little tomatoes that seemed to have escaped last night’s frost. I put them in an outer pocket, grabbed an armful of firewood, and stepped into the cabin.